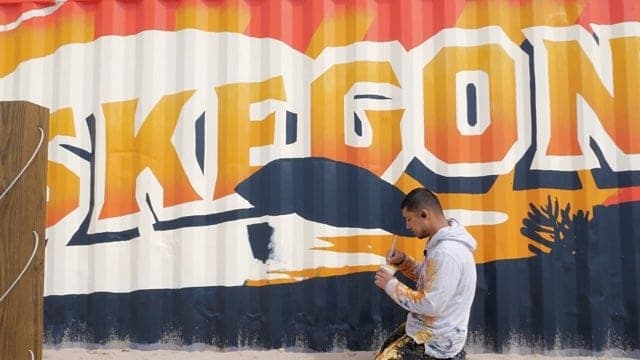 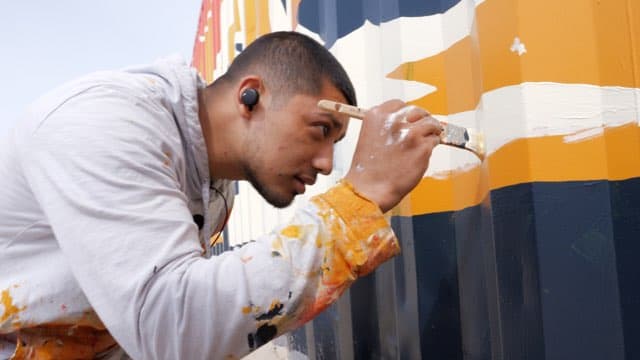 Backdropped by the blues and greys of Lake Michigan, a local artist paints in contrasting reds, oranges, and greens to “capture what we tend to miss.” This is what artist, Jubenal Rodriguez reveals about the mural he was commissioned to paint for The Deckat Pere Marquette Park. Rodriguez expressed how reds and oranges are not often appreciated enough, referencing “the lake with the beautiful sunsets” as a major inspiration for his piece.

The Deck is a beachfront restaurant that recently upcycled some shipping containers to use for their beach beer garden. However, the addition was not originally well received by the local community who felt the large, grey shipping containers took away from the natural beauty of the area. The Deck, which plans to use the shipping containers for more seating, serving windows, and a stage for live music performances, responded by hiring Rodriguez who was happy to take on the project and aimed to represent Muskegon and highlight the beauty of the surrounding area.

Rodriguez, a graduate of Kendall College of Art and Design moved to Muskegon at age 11 and “fell in love with the scenery,” which is apparent in the many murals he has now painted for the Muskegon area. When asked about his love for the city, he noted Muskegon’s potential exclaiming, “it’s a growing city, and it’s (really) diverse!” Through his murals, Rodriguez aims to create “designs that not only fit the environment, but the city itself;” and, hopes his artwork can help “tie the whole city together.” This theme of “unifying one city,” as Rodriguez put it, can be seen throughout his artwork and in the artist, himself who says, “bringing people together and inspiring the youth is what it’s all about.” One of the ways that Rodriguez hopes to bring people together is with the bright colors of his murals and “the joy, happiness, and energy that these colors bring out.” “I think as a pallet, it not only speaks to those words but also brings joy, happiness, and energy to people’s reactions as well. It’s like a mirror,” added Rodriguez.

Rodriguez has been working on painting the second and third faces of the shipping container following The Deck’s season-opening on Tuesday, May 25th, and expects the mural to be fully completed by mid-June. When asked how he feels about being able to create such a significant addition to the park, the words “humbled,” “honored,” and “blessed” were what he used to describe his feelings about the level of interaction his art will see from tourists and locals alike as they head to the pier.

“Having people not only react to it but vibe with it. I think that’s beautiful,” he noted about his artwork. With its gorgeous beaches and bustling local businesses, Muskegon is often referred to as a tourist town, and Rodriguez wants those who view his artwork “to think back and remember how beautiful things can be;” further, commenting, “adding color makes everything more beautiful.” The talent of Jubenal Rodriguez shows that Muskegon has more beauty to offer than just its beaches alone.