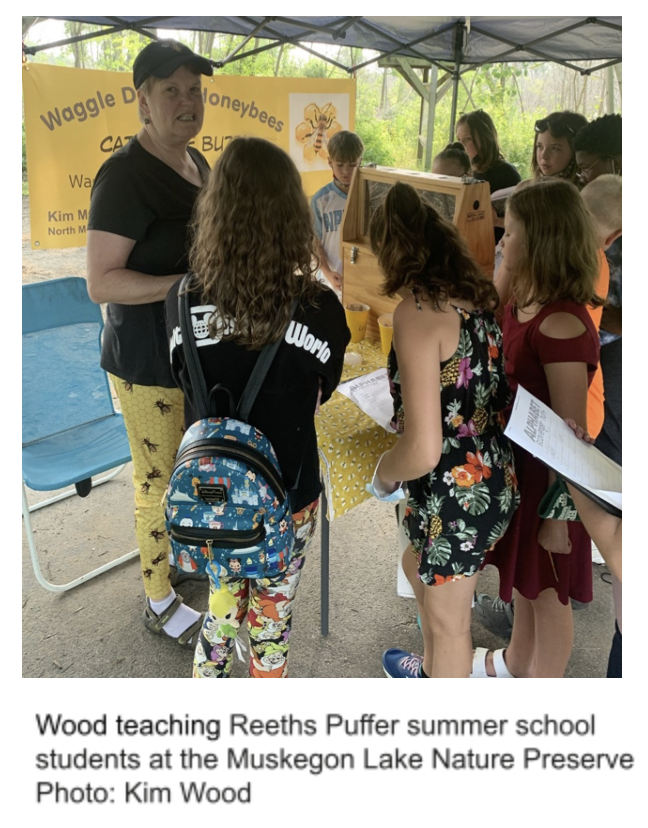 Shelves packed with honey jars, bookcases devoted to beekeeping guides, and an impressive collection of hives located right in the backyard instantly giveaway the sheer level of commitment and passion this Kim Wood has for pollinators.

Wood started small, caring for just three hives after an entire year of research, preparation, and re-reading of “Beekeeping for Dummies.” But now, her hive total is up to 24 and counting, as she continues to rescue homeless colonies that would otherwise be killed. Kim describes her hobby turned mission as almost like an addiction, noting, “My husband says that I don’t always talk about bees, sometimes I’m asleep!”

Soon after realizing the potential, and the overwhelming amount of excess honey she was going to acquire, Wood started her business, “Waggle Dance Honeybees” and began selling honey and educating others on bees.

The name comes from the rather extraordinary communicatory dance bees perform to give each other directions to a specific flower up to 2 miles away. Wood explained that the “amazing” figure-eight waggle dance involves marking a direction 20 degrees from the sun, indicating the distance to travel, and expressing a level of excitement correlated with how good the nectar is.

So, with the help of her waggle dance honeybees, Wood was able to utilize her skill set as a retired high school and college educator to capitalize on the largely unfulfilled niche of teaching about pollinators. Since then, she has spent countless hours giving presentations to schools, gardening clubs, libraries, museums, and frankly, to anyone interested in learning more about the topic she cares so much about. “I’ve taken my passion for beekeeping that I’ve developed and matched it with my lifelong vocation of teaching. And it just seems to be a perfect storm as there’s a burning need for people to know about this stuff,” she said.

Who You Gonna Call?

On top of beekeeping, educating, as well as selling, and harvesting honey, Wood also performs hive rescues. When a colony splits into two for reproductive purposes, it is called a swarm. Unfortunately, in these cases, half of the hive gets displaced and often ends up in a bad, non-accommodating place where they will likely die or be killed. Wood says, “here in Michigan swarms have a 90% fail rate” so she feels an obligation to respond to the calls she does receive and do her best to save the bees. Just this year alone she saved four swarms, which is part of the reason she now has 24 hives (which in the beekeeping world is a lot!).

Given that bees are one of the most underrated, impactful organisms on earth, Wood also said pollinators such as butterflies, bats, and birds also carry out similar roles. She explained that caring for bees “helps us keep tabs on the other pollinators” as they all follow similar trends and are affected by the same environmental factors.

Not only do these pollinators work to support the environment, they also bring in a large proportion of the produce and products we use and consume every day.  In addition to carrying pollen and blooming flowers, they also fertilize fruits, vegetables, nuts, and other crops. In doing this, pollinators support the reproduction of almost 90% of plant species and are responsible for one out of every three bites of food we eat according to the College of Agriculture & Natural Resources at Michigan State University.

So, it is no secret that bees play an important role in maintaining and upholding the earth’s ecosystems. As pollinators, they not only help support the growth of trees, flowers, and other plants but also provide food and shelter to millions of creatures and are connected to almost every piece of an ecosystem.

According to the Bee Informed Partnership’s annual National Colony Loss and Management Survey, a significant 45.5% of managed colonies were lost this past year. There is no doubt the pollinator population continues to dwindle. Wood attributes the resulting spike in colony collapse disorder cases to the varroa mite, an invasive external parasite from Asia that feeds on honey bee fat, which has been a threat to bee health and success for decades now.

Scientists have also credited the decline on a combination of several other factors including: habitat loss, pesticide exposure, increased disease, and climate change. Unfortunately, many of these circumstances are a direct result of human industrialization and society’s apathetic attitude towards protecting the planet. But just as we are the problem, we are also the solution.

As Wood puts it, you don’t have to be a beekeeper to help the cause! “You can plant flowers. You can stop using Roundup, you can put out bee water. I mean, there are so many things you can do to help pollinators,” she says. Wood also points out that you shouldn’t underestimate the impact you can make. “Even if you lived in an apartment complex that had a balcony, you could put flowering plants out on your balcony” and still be a source of change. In addition, Wood recommends considering adding wildflowers to your yard instead of weed killer.

This spring, she partnered with the Muskegon Conservation District to overseed the lawn of the Hilite Corporation in Whitehall with native wildflowers. So instead of investing in ornamental grass that she mentions is “mowed, weeded, and watered for $3,000” there is now a pollinator heaven for ⅔ the cost as well. The United Way of the Lakeshore building will undergo the same uplift this summer. But in the future, Wood hopes other businesses may look to save costs and follow suit. For anyone else interested in making a difference in their own backyard, Wood says, “The Muskegon Conservation District has a native plant sale in the spring of all native wildflowers.”

So, whether or not you are curious about bees, interested in the behind-the-scenes of beekeeping, or looking for ways to pitch in, Wood wants to make it clear that by taking action or simply informing others, you can make a valuable impact. After all, many agree that awareness is the key to getting the community on the same page with becoming more environmentally conscious and pollinator-friendly. As Kim Wood continues to embrace the role of beekeeper, educator, and all-around pollinator advocate, it seems fitting that she should be recognized as an unsung hero; not only for acting as a Lorax for the bees and giving them a voice but also for providing them with a home.